This morning a five-man crew showed up to tear up my house. I was surprised by how emotional I felt watching them rip open walls and knock down lathe and plaster that had to go. 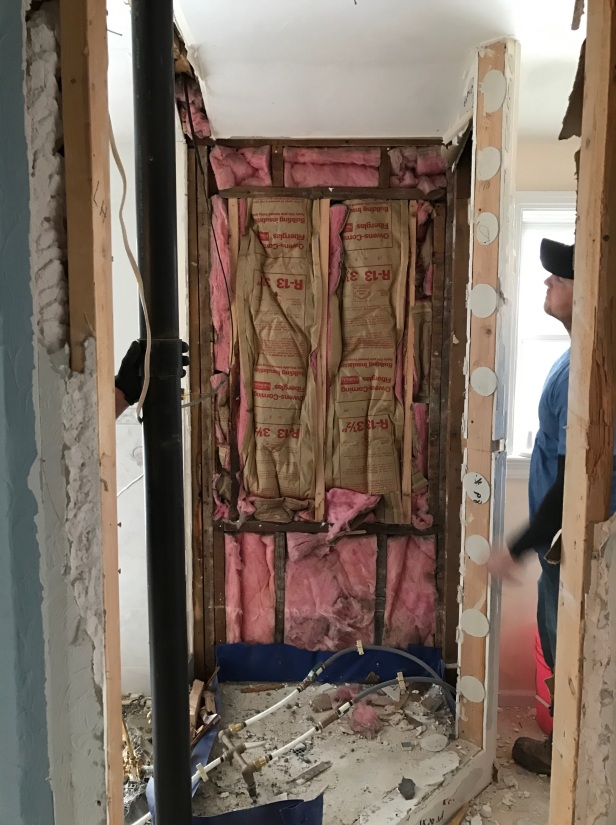 My contractor’s text included this photo and the words, “Uh, check this out!” Wow, was I excited and totally surprised.

This window was hidden behind a stand-up shower stall installed probably in the ’80s. According to the lovely Laura Hill, who lived in our house during the early 1960s, the space wasn’t a bathroom to begin with; instead, it was a little seating area at the top of the stairs.

There really wasn’t room for a shower when someone decades later decided to turn the space into a bathroom, so they walled off a window to carve out a spot for the stall and punched out another funny little window for light (that all this time I assumed was original). You can see that window on the right side of the photo above.

The coolest thing of all is this newfound window is directly at the top of our stairs. So now that we’ve found it, we will definitely install a window there again, and our stairway will be flooded with light. We will also be closing off that little window on the right to make room for our new shower, ha.

It’s about 36 hours into this project, and so far, so good. But I know the tricky electrical and plumbing updates are coming, so I’m not holding my breath that things will continue to go smoothly. More updates to come. •