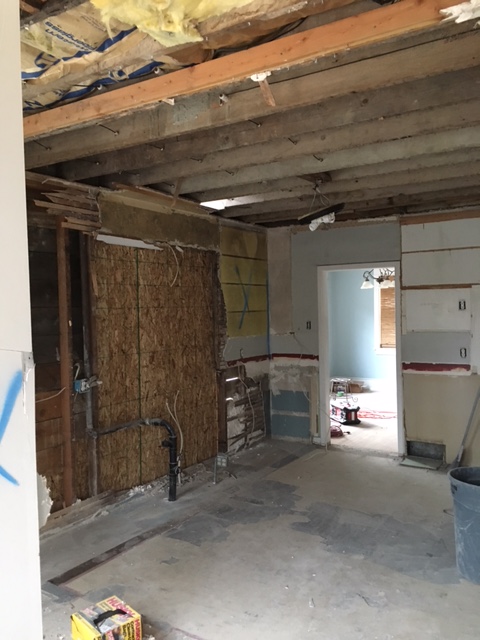 As rough as the inside of my house looked before, it looks doubly rough now. The kitchen ceiling came down, and windows were yanked. The pantry was smashed to reveal yet another inconveniently placed sewer vent (that makes two in the kitchen—lucky us). Both will be re-routed.

Having the ceiling removed is good news because it allows us to access much of the original plumbing and knob-and-tube electrical. The master-bedroom ceiling will also meet its demise, and then the crew will be able to access and update all the plumbing and electrical. Cue the angels singing.

Just an aside: If you Google “knob and tube,” the International Association of Certified Home Inspectors will tell you that “it is not inherently dangerous. The dangers … arise from its age, improper modifications, and situations where building insulation envelops the wires.” We had at least two of these qualities present.

Also inside, Lonnie and I scraped linoleum off the kitchen floor because we’re trying desperately (well, I’m desperate) to save those original hardwoods. Our contractor said they might not be worth saving moneywise, but some decisions shouldn’t be made based on cost. So Lonnie and I took care of the labor ourselves by chipping away at brittle linoleum and yanking screws, nails, and staples. I am 85 percent sure we can save these floors, and that’s a totally uneducated guess, but I’m still pretty sure. Ha!

After scraping—looks promising, right? See the “before” at the top of this post.

Next up: Framing (I said that ten days ago, but I jumped the gun), plumbing replacement, and electrical upgrades. •