Christmas is the season for wreaths, but not all doors lend themselves to hanging a wreath. I used to have a storm door in front of my front door, and I wasn’t too keen on smashing a wreath between the two. Now I have a round window in my door, and since it seems redundant to hang a round wreath over a round window, I have been avoiding it.

But last week I saw a woman hand-painting poinsettias on picture windows at the Festival of Trees, and I remembered this favorite image I pinned four years ago: 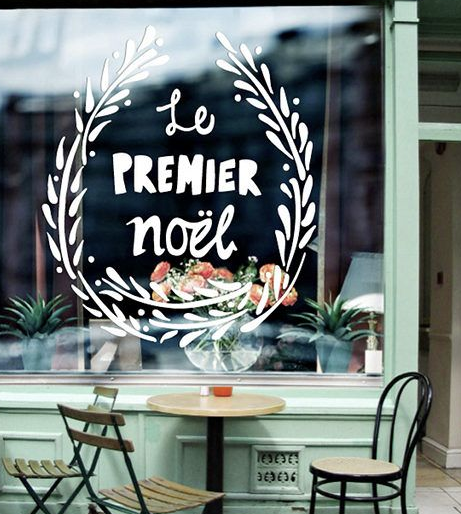 So fab. Not to mention how great the paint color is on that building, and it appears this was shot in France or, at the very least, in a French-speaking country. So much cooler than Idaho.

I decided to replicate “le premier Noel” (“the first Noel,” if Google Translate is on top of its game) on my round window, wreath and all. My mom worked up the design in Photoshop, and I gathered my supplies: white tempera paint and paintbrushes. Easy and cheap.

Applying the entire image in vinyl would have been easiest, but I prefer the look of paint. That said, this project was not fast or fun. Here are the two ways I tried to get it done: 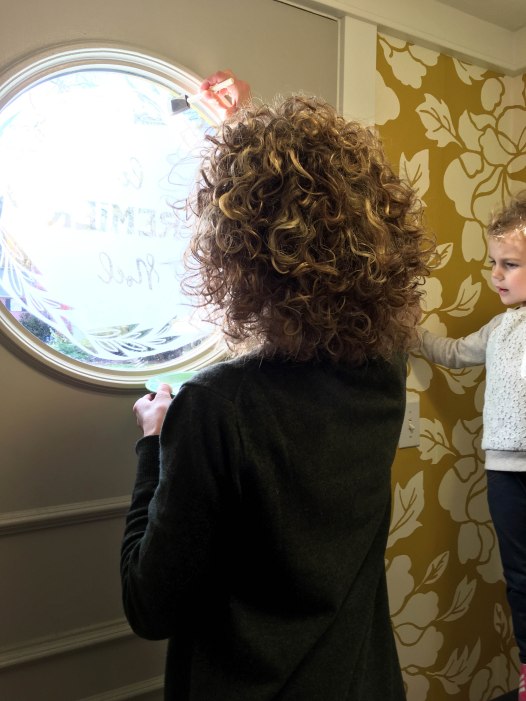 With this method, the paint seeped under the tape in several places. It took forever to get the stencil properly in place, and because the completed wreath didn’t look terrible, I decided to keep it. But the letters were a failure, so they were wiped away, and I tried Version 2.

The result was good enough, so here’s the completed look:

Next year, I think I’ll just paint the wreath portion. But for Christmas 2016, we will celebrate “le premier Noel.”

Would you paint a design on your window? It would be really fun if your house has picture windows or gridless windows. And are you good with a paintbrush? If so, this project might not be as tricky for you as it was for me. But I will say tempera paint is easy to use, dries fast, and washes off easily. So that, at least, was a win. •