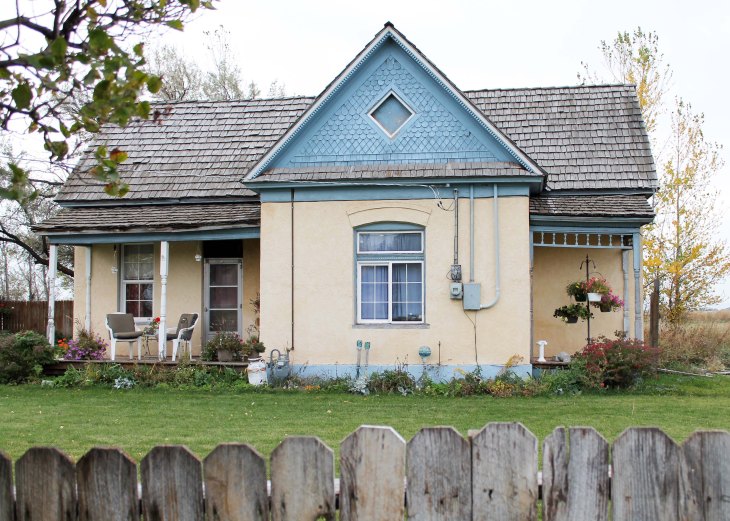 Today I saw the house where my grandmother was born. Right in the front bedroom, the one with the big window, she came into the world. Some of her 10 siblings were born there too, and so was her own mother, back in 1906.

Grandma sat in the passenger seat as we looked at the house where strangers now live, and she chattered on about the parlor where no kids were allowed, with its fringed Persian rug, hardwood floors and upholstered furniture — this room was reserved for special guests. She remembered the big cottonwood in front where she would swing and swing and swing as her cousin pushed. She remembered all three porches and how the sunshine would chase the ladies from one to the next to the next. And she remembered a playhouse in the back, furnished it with a toy piano and lots of dollies.

“In my mind I can still see what it looked like when I visited, and sometimes that memory is better than what I saw when they fixed it up,” she said. 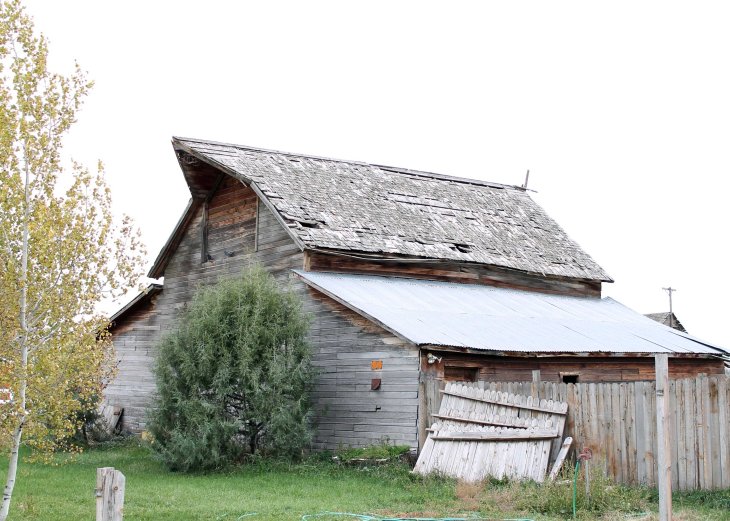 Because the house is different now, not ugly or unloved, but different. The brick is covered with plaster—the mortar was failing—and the cedar fish-scale shingles in the eaves now are blue, not natural. The humble one-car garage, almost a shack, now leans and wants to lie down, and the great barn has turned gray and sags with neglect.

Her grandpa, Mel Cook, was a carpenter, and he built all three buildings. He was a farmer too and lived off the acreage by his house. He died in 1944, when my grandma was 3.

It all seems so quaint, a story of a family that worked hard, worked the land, and loved each other. It’s the start of a story new to me but not new, moments from the past that would multiply and divide with the characters in them until I came to be years later. And if we hadn’t taken that drive, the stories might have ended with Grandma.

That’s why little trips out of town to the very important places of our past are worth the time. The people who lived these stories are gone or soon will be, and the stories will go with them if they aren’t told to those who’ll listen.

We stopped next at a house we couldn’t see for all the suckers that sprung up as trees and grew taller than they deserved. This was the house my great-grandpa Warren Bird helped his folks build in 1919, when he was 17 years old. The bachelor who lives there now saw me maneuvering for the best view from the road and invited us in. I asked Grandma what she thought, and she whispered like a child, “I’d sure like to see it.”

So we did. He shared tales of the old Bird farm and how he saved it from the brink because he fell in love with it the minute he saw it. He researched our family history to better understand this house, and as years past he met lots of Birds who stopped for a look. He even became friends with my great-grandpa, the one who helped dig the earthen basement with his brothers and who met his sweetheart just down the road at the house we visited first.

The current homeowner lives there alone, and he’s not going anywhere because he loves little things like the original doors and doorknobs, plaster walls and push-button light switches, and the huge picture window designed so the Birds could look out on their eight acres of farmland and smile.

As we stood in the room where my great-great-grandmother died, the homeowner didn’t seem spooked or theatrical when he told us what he knew; instead, he seemed proud that he had loved this historic house the best way he knew how. I think Grandma and I were proud too—proud to be part of a people with a history worth celebrating and to remember their legacy on a windy October day in a house built by the family that built us. •