I remember the first time I saw a photo of my Grandma Evadean as a young woman. I was seven, we were at a family reunion, and my mom had put together an old-school slideshow full of black-and-white photos. When my grandma’s portrait clicked into focus, I gasped. She could have been a movie star, an old Hollywood heartthrob. I fell in love with her all over again, but a different her than the one I knew.

Later I saw portraits of my Grandma Nell too, one of the classiest women I know. Her hair perfectly coiffed, her jewelry understated and elegant, she oozed elegance.

Portraits like these, though, are becoming a lost art. It would never occur to me to schedule a sitting for my own portrait at age 33, though I treasure portraits of my grandmothers close to my age.

Why the change? For centuries women have immortalized themselves in portraiture. Hundreds of years ago those with status had their portraits painted. We’ve all heard that the more of the subject represented on the canvas, the wealthier she was—that means a whole body image symbolized a bigger net worth.

But by the 16th or 17th century, in northern Europe especially, portraiture became more popular and accessible. Because of the Reformation, the Catholic church wasn’t the sole employer of artists, who could suddenly make a living doing secular work. That meant the wider populace was able to purchase landscapes and seascapes and commission portraits. Even the middle class could afford to have small paintings depicting a figure from the neck up, hence the proliferation of nameless men and women on canvases at antique stores and flea markets.

I became so intrigued with the topic that I wrote a feature on it for Idaho State Journal a year or so ago (click here for the piece). I learned two things in my research and interviewing: Portraiture dwindled as cameras dropped in price and became affordable to the masses. With every amateur wielding a point-and-shoot, fewer people budgeted to have professional portraits taken.

It’s ironic too that while current portraits are dying out (or are dead already), antique painted portraits have become trendy; pick up any shelter magazine, and you’re likely to see no-name oil portraits, picked up secondhand, hanging on the walls of featured homes. One Idaho State University professor attributes that attraction to “the human connection, even seeing images of human beings that you don’t know, regardless of time period or culture.” It’s that kind of connection posterity will lose if people today continue to live and die without having their portraits taken. 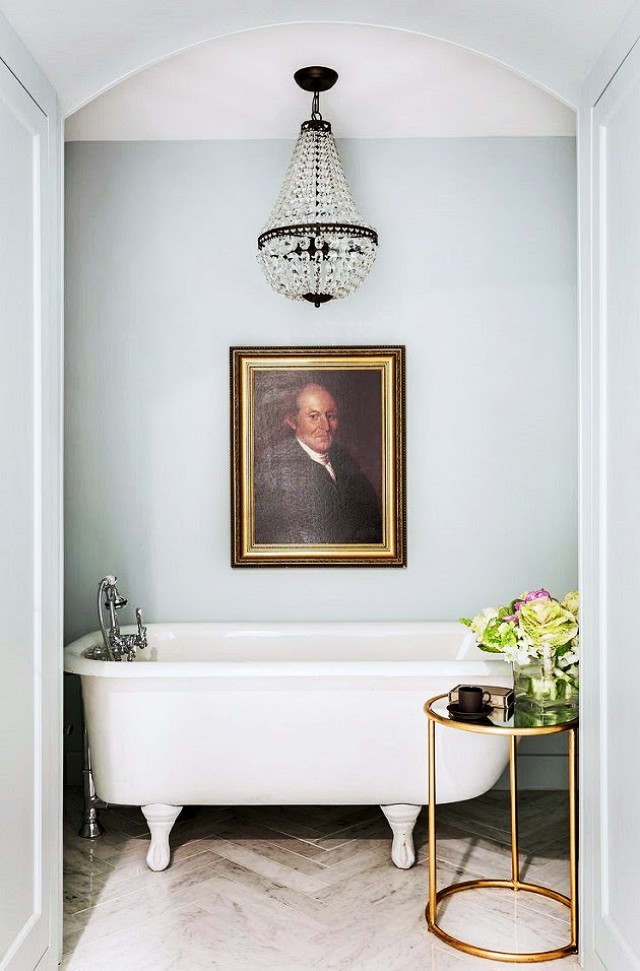 via—not a woman in this portrait, but the bathroom is so good! P.S. The link takes you to another article on portraiture

What are your thoughts? Would you ever schedule a photo shoot for yourself “just because”? If you did, would you display the photos in your home or stash them in a photo album for future generations? And what do you think about hanging painted portraits of strangers in your house? Seems a little creepy to me, like I might see their eyes watching me as I moved around the room. I’d love to know what you think!

#blackouttuesday
A few years ago, I saw photos of the 1961 Freedom Riders and realized for the first time that white women rode those buses too. And I wondered, Would I have enough guts to do the same? To risk jail time, injury, and maybe death to stand beside others who weren’t truly free? I still think about this and want to be that kind of person. #blacklivesmatter
In a perfect world, I would be en route to the annual Heritage Day in Spring City, UT, but #coronavirus. So it was an extra sweet surprise when I WON the grand prize associated with this year’s art auction! 🎉 (Swipe to see my spoils!) I love original art, and this lilacs painting by @cassandriaparsonsart is sublime. Also, how lovely is the branding on the @momsstuffsalve? I can’t wait to try the products and display them in my master bathroom. There’s always amazing art for sale during Heritage Day, and you can check out this year’s virtual sale here: https://m.charityauctionstoday.com/m/auctions/spring-city-utah-heritage-day-2020-art-squared-auction-12066/items Thanks so much to @friendsofhistoricspringcity! Check out their IG page for online tours and other fun stuff. Historic preservation forever. ❤️