Interested in preserving South Boulevard and having fun while you’re at it? Join us for a “bike-in” Monday, July 29 at 7 p.m.

Our goal is to have at least 100 people of all ages ride in the South Boulevard bike lanes to illustrate just how the current lane striping compromises the road’s function and safety.

Meet on the east side of South Boulevard between 22nd and 23rd—you’ll know you’re in the right place when you see decorated tables and balloons. We will ride single-file as a group north to 17th Street, then south to Sunnyside, and back to where we started—basically a little loop on that stretch of road. The entire distance will be two miles. 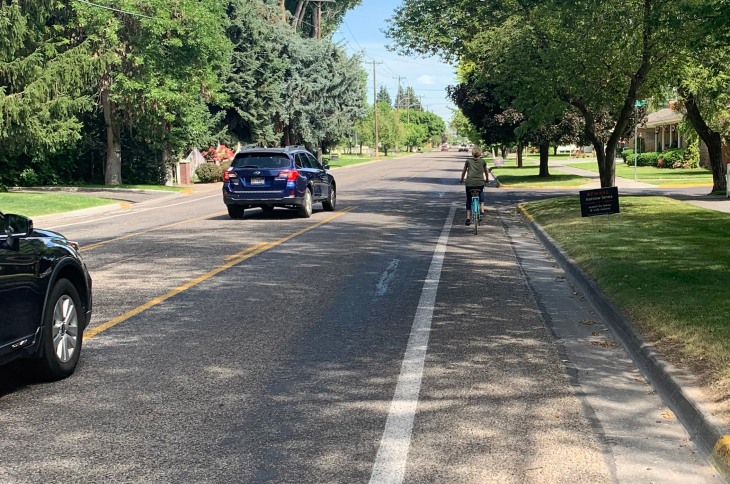 See how the cars move into the turning lane to pass people on bikes? That’s because the bike lanes put cyclists too close to cars. What do you think happens when cyclists are on both sides of the road?

Just to be clear, we do NOT think bikes are the problem. On the contrary! We want the road to be more friendly to cyclists. We want families to feel safe hitting the road together. We feel this can be accomplished in many ways, but too-skinny bike lanes are not the answer. And no, we aren’t suggesting that people should teach their kids to ride two-wheelers on South Boulevard, but let’s make it possible for riders of all ages to use bike lanes to get somewhere and to see something lovely in the process.

The bike-in is a great opportunity to teach kids about peaceful protests too. It’s our small-town version of a sit-in. My kids will be there, and I hope you’ll bring yours. For everyone’s safety, we have invited law enforcement to patrol the area.

The real takeaway will be the visual. Cars will have a heck of a time driving down South Boulevard when the bike lanes have bikes in them, which must mean the lanes don’t work.

So let’s fix them.

This is what community involvement is all about! Hope to see your family next Monday. •