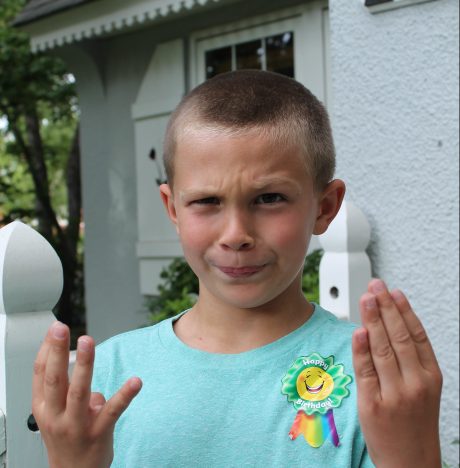 Poor kid doesn’t know what’s about to hit him.

By the time you read this, the damage will be done.

I will have already destroyed my son’s innocence and whatever mysticism I carried in his sweet mind.

At least it feels that way now. He’s 8, and it’s time for The Talk.

I’ve been dreading this moment since the moment my mom had The Talk with me. I remember my horror as she explained how babies were made, news so shocking it stunned even her most talkative girl to stone-cold silence. It was the day I forever changed the way I played with dolls, never saying they were “my” babies unless I quickly followed it up with something like “… and I adopted them.” Because I never, never could imagine having a baby of my own based on what it required at the front end.

For months I’ve been scripting The Talk in my mind, imagining my careful and calm tone, imagining the smile I’ll engineer, imagining the details I’ll mention and those I’ll leave out for now. I’ve been trying to imagine what role my husband will take—because he’ll be there too—and what information he’ll cover.

“Be direct and simple,” the experts said. “Use scientific names for the body parts involved, and answer questions.” I think I’ll blush if my son asks the kind of questions my sister asked my mom, like, “Does something come out of the guy?” And I think I’ll cringe if my husband can’t bring himself to use biological terms and reverts to calling everything “privates.”

But it’s possible. It’s all possible and terrifying and an absolute rite of passage—for my son and for me. It appears I’m on the very brink (and gripping the ledge with my toes) of transitioning from a mom of little kids to the world of almost tweenagers.

Nervous though I be, I can’t leave anything to chance. According to Focus on the Family, “Too many children learn about sex from everyone but their parents. Playground slang and obscenity, a distorted description of intercourse from the tough kid up the street, or worst of all, a look at some pornographic material on cable TV or the Internet often provides a child’s first jarring glimpse of sex. What should be seen as the most beautiful, meaningful, and private communication between a married couple becomes a freak-show curiosity.”

That’s exactly what I’m hoping to avoid. I guess my consolation is that now he’ll know what I mean when I change a radio station because a song’s lyrics are “inappropriate” or when I threaten him if he ever dates a girl who “shows her body.” Like my mom said, “Once you have ‘The Talk,’ everything just makes more sense to your kids. They finally understand the world and why you’ve been raising them the way you have.”

But I think my heart will break if he doesn’t want to snuggle with me anymore because that seems too gross or if he’s afraid to come in our bedroom when he has a nightmare because we might be “doing it.” If that happens, I’ll remind myself of two more things I learned from Focus on the Family: “The best place for a child to learn about sexuality is at home from those who care most about him,” and “giving a child facts about reproduction, including details about intercourse, does not rob him of innocence.” But I’m just not sure that last statement is entirely true.

How did we get here anyway? Just yesterday he was catching tiny frogs and splashing in puddles and hiding from me at the library.

I guess we all know how we got here—it’s precisely the thing forcing me to have The Talk this weekend. Doing the deed is how I got kids in the first place and what’s causing all this angst today.

And the worst part? I have two more Talks to go. It’s almost enough to choose a life of celibacy instead.

For more tips on talking about sex with your kids, visit Focus on the Family. A version of this column originally ran in Idaho State Journal.