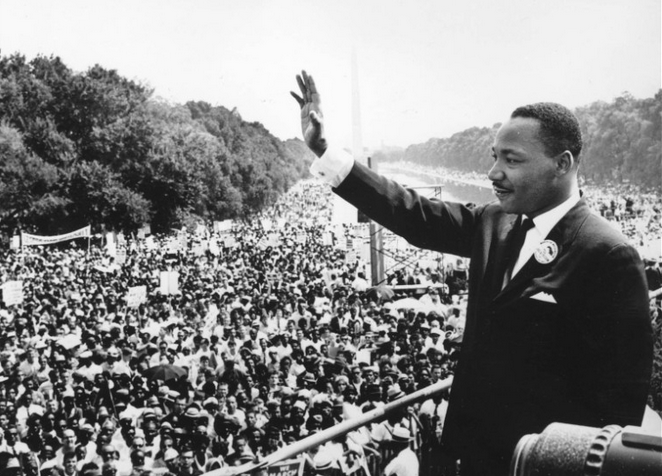 The Civil Rights Movement often isn’t given much coverage in our public schools. Maybe that’s because of outdated textbooks or curriculum. Maybe it’s because there’s just so much information to cover in an American-history class. Or maybe it’s because the way blacks were treated (and are still sometimes treated) is a dark spot on our country’s history. I’m guessing that in a lot of cases, a combination of these reasons leads to neglect in the classroom.

I didn’t learn anything about the Civil Rights Movement during high school or my first four years at college. When my husband Lonnie and I went to Washington, D.C., and visited the Lincoln Memorial, he said, “I’m pretty sure this is where Martin Luther King gave his famous speech.” I didn’t even know that.

But when I chose to pursue a master’s degree in rhetorical studies, I was required to take a class titled “Recent Rhetorical Issues.” Recent is a relative term, and for the entire semester, we studied just two issues: the Civil Rights Movement and the Vietnam War. What I learned in that class, particularly in the first half, changed how I see race issues.

Today I feel very strongly about the way African Americans have been and are treated in our country. And for people who say blacks need to “move on” or “get over it,” I suggest doing more research. Just like with everything else, the more you know about an issue, the more empathy you have for the people involved.

A good place to start is with the story of Emmett Till (this link is great, but you haven’t seen everything until you see the photos of Emmett in his open casket; Google those if you’re curious, but be aware that they are graphic). When you read his story and the story of his mother, Mamie, it changes you. Mamie is one of my heroes for doing something so brave after the murder of her son.

Sometimes I feel too ill informed as a white woman to comment on racial issues. I understand I’m privileged—life has not been hard for me. I would hate for anyone to think I’m addressing this topic in a spirit of condescension. I would also hate for those who have faced racial intolerance to discount my opinion because I haven’t lived what they have.

But sometimes you’ve just got to speak up, regardless of your race. The topic of black treatment in America isn’t going away, and in the last year, the conversation has gotten more and more heated with police shootings of unarmed black men. When you have kids, it’s important to address these difficult topics. Actually, they aren’t too difficult—really, it’s all about teaching children to evaluate based on the content of a person’s character, not the color of his or her skin, as Dr. King said. And that’s exactly the kind of discrimination I want to foster.

Next week I’ll be sharing a couple storybooks and a young-adult novel that can be used to introduce kids to the Civil Rights Movement. But here are a couple resources for adults who want to learn more:

• The PBS series “American Experience: Eyes on the Prize.” You can purchase the entire series here, and you can watch clips at this link.

• Focus on the Family episode about a woman named Carolyn who survived a 1963 church bombing in Birmingham, Alabama. This is a good listen for families too. •