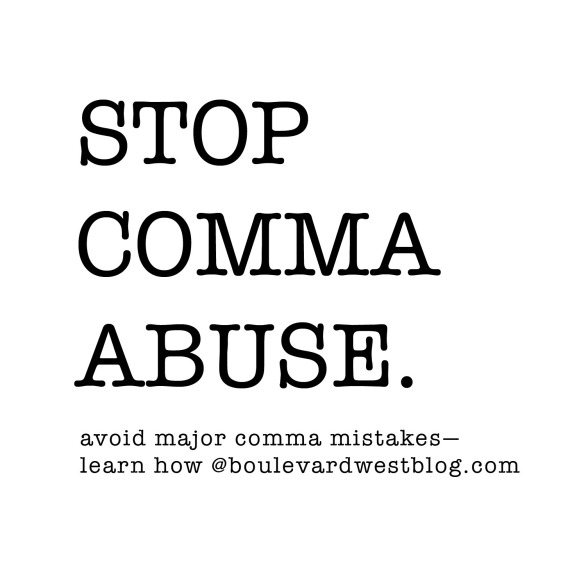 I recently posted about the four comma rules, a topic near and dear to my heart. I promised a follow-up highlighting common ways commas are abused and cheapened, and here they are:

Take a look at this example:

The dress had a huge hole in the back, Sarah wished she could mend it.

This is called a comma splice, where two independent clauses or “mini sentences” are spliced together with a comma. This sentence is easily fixed in one of two ways:

* With a semi-colon: The dress had a huge hole in the back; Sarah wished she could mend it.

* By adding a coordinating conjunction: The dress had a huge hole in the back, and Sarah wished she could mend it.

After and or but at the beginning of a sentence.

Elementary-school teachers tell students to never begin a sentence with and or but—understandable because little minds need to learn how to write complete sentences with both subject and verb.

But we’re adults, and we can write complete sentences. So using and or but at the beginning of one sentence is a great way to propel readers into the next. It ups the tempo of your writing, and mixing up rhythm is a great way to keep readers engaged.

However, if you slap a comma after and or but at the beginning of sentence, it’s like you’ve propelled your readers into the next sentence just to slam them into a brick wall. Here’s what I’m talking about:

You know I love to eat a good burger. But, I also love a long run in the morning.

Read it out loud and you’ll see what I mean. Don’t put the brakes on your speed. Do not use a comma here.

One exception to this occurs when you’ve got an unnecessary phrase after the and or but (remember Comma Rule Three); in that case, you’ll need to put a comma before and after the entire phrase. Like this:

And, considering the time and money involved, maybe golf wasn’t the right pastime for him.

I only cook with butter, because it tastes so much better.

Because is not a coordinating conjunction. The FANBOYS are an exclusive group, and because is not welcome. Don’t force it where it isn’t welcome.

Commas used as a fix-all.

If your sentence doesn’t require a comma based on the four rules but reads awkwardly, don’t simply sprinkle liberally with commas and hope it’s fixed. Revise your sentence instead. Especially with college students, I’ve noticed serious hesitation to rewrite anything, even a short paragraph or a couple lines. But being ruthless in your self-editing makes writing so much better. Besides, there’s always more than one way to get your point across. So rephrase, redraft, and clarify your thoughts.

One more thing: Even though I told you there were four comma rules, there really is a fifth—and it’s just as important as the rest of them:

When in doubt, leave it out.

If you aren’t sure a comma is needed, don’t clutter your sentence with one.