I live in a town where it’s fairly common to see trucks driving around like this: 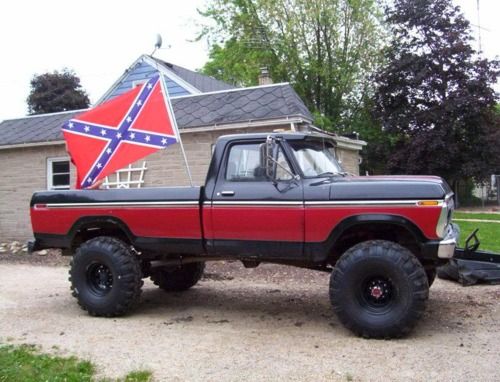 I bet a lot of people who drive around with Confederate flags on their jacked-up trucks don’t know what that flag really stands for. To them, I bet it’s a symbol of rebellion or a redneck lifestyle—which is probably the lifestyle they live and are trying to validate.

Symbols are ridiculously powerful, and it’s problematic if you’re sporting a symbol you don’t understand. It’s the same problem presented by monuments built to immortalize people with infamous pasts.

A couple weeks ago, a rally turned deadly in Charlottesville, Virginia, when a white nationalist group called Unite the Right showed up to protest the removal of a statue of Confederate general Robert E. Lee in Emancipation Park. Counter-protesters showed up too, and a 20-year-old white supremacist named James Alex Fields Jr. allegedly slammed his car into that crowd, killing 32-year-old Heather Heyer. Nineteen others were injured.

A few days later, I was at the home of one of my very favorite people, a passionate history buff who taught high school for most of his adult life. He was disgusted by the violence in Charlottesville but was also disgusted by the idea of taking down monuments.

“Where will it end? Should we tear down Monticello or Mount Vernon because slaves were there? What about monuments for Andrew Jackson because you know how he treated the Native Americans….” My friend’s solution was to educate people, to maintain existing statues but add plaques explaining the legacy of the person, both good and bad.

This man is a good person who loves people—he’s one of the most loving people I know. But a statue is different than a historic home or site, a point made by Jack and Warren Christian. These two men are great-great-grandsons of Stonewall Jackson and recently wrote an open letter encouraging leaders in Richmond, Virginia, to remove a statue of their grandfather on Monument Avenue. Here’s their argument:

“Confederate monuments like the Jackson statue were never intended as benign symbols. Rather, they were the clearly articulated artwork of white supremacy.”

Most statues are not historic. We aren’t talking Michelangelo’s David here. Statues were built after a person lived as a way to celebrate him or her. We don’t build monuments to honor people we despise or are ashamed of.

On the other hand, the home where a person lived was there before and while the person lived, endowing the structure with historical importance. Indeed, some of the best lessons are learned while experiencing, even briefly, the locations where history was made.

So let’s address the real problem. If monuments and statues foster hate and fighting, let’s remove them. Because they are not historically significant themselves, statues and monuments do not carry the same value as historic sites. And plaques would be paltry acknowledgments that what the person did was wrong—the statue will always loom larger than a plaque and its inscription.

Also, let’s get educated on history, its symbols, and what they really stand for. Because as the old adage says, if you don’t know what you stand for, you’ll fall for anything, and it’s starting to feel like American is on the brink of a free fall.